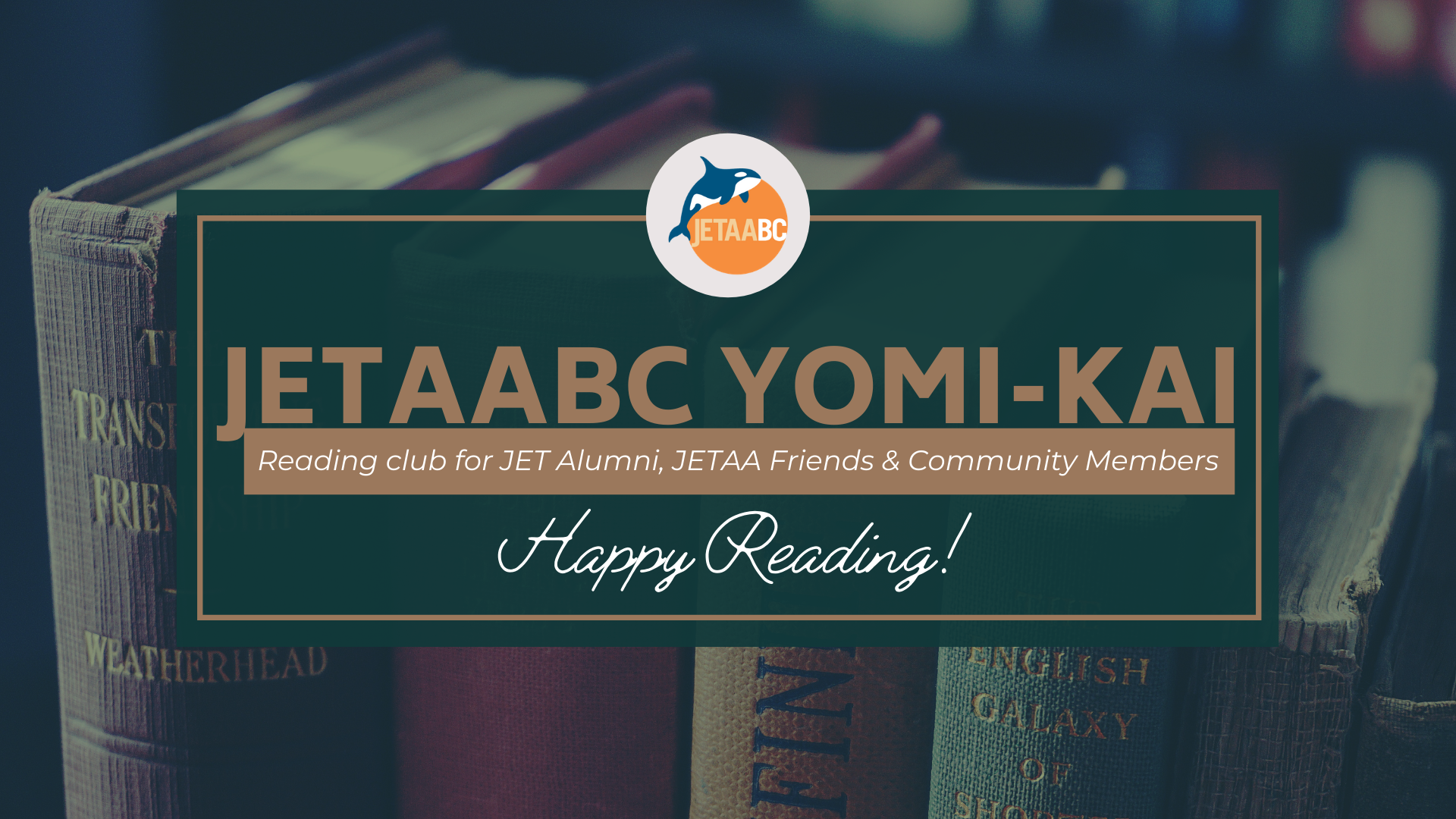 JETAABC Yomi-Kai is a reading club created for JET Alumni, JETAA Friends and community members to gather to discuss and discover short stories by Japanese Authors in translation or by Japanese Canadian authors.

We always start by sharing first impressions and questions that we have and let that guide the evening. From exploring characters, plots, point of views, to the general theme of the work; these are just some of the angles we will talk about with each reading piece.

We have a rolling registration system. Sign up here.

When you sign up you will get access to the readings, next meeting updates, and access links. Next month’s dates and readings will be decided by the attendees of the previous meeting.

For our next Yomi-Kai meeting

“Then the fruit had been hidden in the leaves. Now it stood clear against the sky.

There was strength in the fruit and in the circle of leaves at the base. Kimiko went and knocked it down with a bamboo pole.

It was so ripe that the seeds seemed to force it open. They glistened in the sunlight when she laid it on the veranda, and the sun seemed to go on through them.”

I was absolutely taken with that lemon. The color, pure and simple, like lemon yellow pigment straight out of the tube, solidified. And perfectly shaped like a squat weaving spindle. I decided to buy just one. Then where and how do you think I walked?

December 2022: A Once Perfect Day for Bananafish by Mieko Kawakami

In our eyes, the old woman has lived for so long. So very long. No matter when now is, it can’t be stopped from being now somewhere — and that has become one of the few friends she has left.

Dear Madam: I do hope you will forgive this presumptuous letter from a complete stranger. What I am about to write, Madam, may shock you no end. However, I am determined to lay bare before you a confession— my own— and to describe in detail the terrible crime I have committed.

October 2022: A Conversation with Hiromi Goto

We invited author Hiromi Goto to share insight about her anthology, Hopeful Monsters. We appreciated hearing about her focus on the body in literature, as well as her diverse representation of elderly protagonists and characters caught between cultures.

“Married a white girl, got divorced. Now I’m a cowboy.” Just as well, Jun thought. He’d started noticing that things he’d thought were matter of fact, concrete, weren’t necessarily so. A wife. A home. What was solid could turn liquid. It confused him and made him terribly absent-minded. Probably break his neck if he was on a horse.

August 2022: The Priest and his Love by Yukio Mishima

In the twinkling of an eye the present world had wreaked its revenge with terrible force on the priest. What he had imagined to be completely safe had collapsed in ruins.

“Don’t you think it’s odd saying something is either psychological or physical? Because I don’t think they can be divided or separated that easily. It’s like, Utsui, your shoes and shoelaces being classed as separate things… look, take mammals, right? Dolphins and whales and people are the same – they are all mammals. It’s like you can ignore the size and weight – it makes no difference because we’re all the same, you know.”

June 2022: The Cafeteria in the Evening and a Pool in the Rain by Yoko Ogawa

“Children get obsessed with the strangest things.” The man smiled for the first time in my presence–not the smile of a cult member, of course, but something much simpler and more natural.

“I’m not sure I see the connection between a sweet little boy like this and a cafeteria.”

“Perhaps it’s some strange complex circuit that’s impossible for us to imagine,” the man murmured.

May 2022: Scheherazade by Haruki Murakami

Enthralled, Habara was able to forget the reality that surrounded him, if only for a moment. Like a blackboard wiped with a damp cloth, he was erased of worries, of unpleasant memories. Who could ask for more?

“Oh my god!” someone finally gasps, from far beneath us. Another person screams. Fathers faint and an enterprising teenager grabs a camera from a supine parent and begins to snap pictures. None of it matters. Tears drip from my eyes and the liquid jewels float alongside us like diamonds in outer space. I burst out laughing and the children laugh too. I don’t know what will happen tomorrow or the day that follows but the possibilities are immeasurable.

“The smell was just awful. And that was that. There wasn’t a thing I could do and now everyone will go away thinking, ‘It’s true. Oriental people. They smell funny,'” Mom said.
“You shouldn’t say Oriental, Mom. You should say Asian.”
“Asian, Oriental, it doesn’t change the way takuwan smells,” she said.

February 2022: The Death of the Last White Male by Ruth Ozeki

“The death of the last white male occurred on the very first day of the Chinese New Year, and to make matters worse, it was the Year of the Cock. When Grace discovered the lifeless body, she was filled with foreboding. He was a Silkie, a magnificent bird with showy snow-white plumage, and sapphire blue cheeks, and a powder puff on the top of his head. His name was Gorgeous, but mostly they just called him ‘The Gimp’ on account of the limp he had acquired in a battle with his predecessor, Bootsie, who had been the king of the roost until he died of a mysterious flu-like illness.”

What are the possibilities can one explore with the people you interact? What if…

A couple is suddenly awaken in the middle of the night and things take a turn for the weird.

November 2021: The Hut on the Roof by Hiromi Kawakami

We will be transporting ourselves to sit in an izakaya together with a divorced English teacher narrator in Hiromi Kawakami’s “The Hut on the Roof.” Through the interactions with other regulars, we get to learn everyone’s backstories and connections.

Taking a step away from short stories and reading some Noh Play scripts. Noh is the oldest form of specialized dance-theatre that has been performed since the 14th century.

September’s reading is the Dancing Girl by Mori Ogai. This was Ogai’s very first published short story. It’s based on his personal experience in Germany during the Meiji Period with strong parallels with Puccini’s Madame Butterfly.

August’s reading was from one of the classic modern authors Natsume Soseki’s First Night and Third Night.

July’s reading will be Author Ira Ishida’s first short story out of his urban novel series, “Ikebukuro West Gate Park” or IWGP for short. These short stories have been adapted to anime, manga, and more popular cultural mediums. The series revolves the Ikebukuro neighbourhood and 20-year-old, Makoto, who frequently gets involved in highly dangerous situations, usually against his own judgment.

June’s selection is from the Father of Japanese short stories himself, Akutagawa Ryūnosuke. We will be reading Rashomon. A classic short story that has often been referenced in Japanese and even North American pop culture. Bonus points if you have seen the film adaptations of this short story!

We have invited Author Grace Eiko Thomson to discuss her memoir, Chiru Sakura — Falling Cherry Blossoms: A Mother & Daughter’s Journey through Racism, Internment and Oppression. Join us as we learn more about the Canadian Japanese History through Grace Eiko Thomson’s powerful story of resilience in the face of racism, sexism, and internment.

April 2021: “The Special Place” or “Flower Abstraction” by Yumiko Kurahashi

Choose one or both of the following short stories from Yumiko Kurahashi’s Anthology “The woman with the flying head.” Yumiko wrote these stories based on the art pieces linked beside each short story:

The Akutagawa Prize winning short story by Yoko Ogawa accumulates details to subtly yet expressively comment on the human psychology in her writing. What kind of meaning into the details of this short story can you gain?

February 2021: “The Tattooer” by Tanizaki Junichiro

A classic short story by Tanizaki Junichiro’s debut work, “The Tattooer.” This is Tanizaki’s very first published short story and really sets the tone of his future writing styles and themes. Tanizaki is one of Japan’s famous modern writers. His writing often challenged aesthetics and sexuality in an era where Japan was being introduced to “western” ideas.

“One friend gathers their old college friends in an attempt to start a cult for economic gain.”

This short story explores a couple who entered an asexual marriage in exploring ways to have children.

This book is a collection of eleven stories where individuals who lift the curtains of their orderly homes and workplaces are confronted with the bizarre, the grotesque, the fantastic, the alien–and, through it, find a way to liberation. This collection of short stories would be a good contrast of discussion with this week’s reading. *rephrased from the Goodreads synopsis.

Discussions will start with “Barn Burning” and then we will move to the other short stories in the book. Food for thought: What is the Elephant that Haruki is acknowledging in each short story in order for the “elephant in the room” to vanish?